Waterfront Place is a premium grade office tower located within the “golden triangle” of Brisbane’s CBD. Acting on behalf of the Future Fund, RF Corval acquired a 50% interest in this property from Stockland in 2011, with Stockland retaining the other 50% interest. RF Corval was appointed as the Future Fund’s asset manager and representative on the joint owners’ committee, which had responsibility for setting and implementing the strategy for this property.

The property required intensive asset management, focused on leasing and capital upgrades, to ensure that the building remained competitive given the competition that was anticipated from new office towers that were being developed at that time in Brisbane’s CBD.
The capital works program included a major lift modernisation, construction of state of the art end-of-trip facilities, refurbishment of the car park and the refurbishment of the bathrooms, setting a benchmark for premium grade buildings, along with a number of energy savings initiatives. These targeted capital works were instrumental is attracting new tenants to the building and encouraging major existing tenants to renew and extend their leases.
During the period of the Future Fund’s ownership, new tenants were secured on 34% of the space and lease renewals and extensions were agreed on a further 22% of the space, ensuring that the property maintained a high level of occupancy and relatively long WALE, despite the challenging leasing conditions in Brisbane over that period.

RF Corval acquired a 50% interest in Waterfront Place for $216.38m ($432.75m for 100%) in 2011, on behalf of the Future Fund, and successfully implemented the pro-active leasing and capital works program over the 5-year investment horizon. RF Corval was then instrumental in selling 100% of the property to Dexus in 2015 for $592.00m – the largest ever single office property transaction in Brisbane. This investment delivered to the Future Fund a total return in excess of its initial return target. 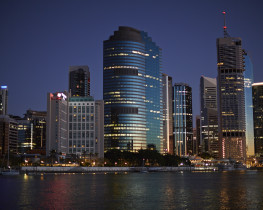