78 Waterloo Road is a high quality office property in Macquarie Park, the second largest office market in NSW, after the Sydney CBD. RF Corval acquired the property for the Value Active Fund, a club of Australian institutional investors, in 2013 for $71.80m. The property was multi-let with Schneider Electric leasing 62% of the space until 2020 and Boehringer Ingelheim leasing 22% of the space with an expiry in 2017.

RF Corval’s strategy was to focus on retaining the major tenants and leasing the vacancy. In order to achieve this, RF Corval developed close relationships with the major tenants to understand and address their concerns with the building. RF Corval set about implementing a strategy to enhance tenant satisfaction by significantly reducing the operating costs, improving the cleaning, enhancing the tenant comfort within the building by optimising the operation of the external shading system, improving the café offering in the lobby, converting unused storage into additional car parking and creating a landscaped outdoor area as an additional amenity for the tenants. Collectively these small changes resulted in significantly higher tenant satisfaction, which led to RF Corval securing an early 5-year lease extension with Boehrigner Ingelheim, whose lease was due to expire in 2017. In addition, RF Corval re-leased the small office and retail suites that became vacant shortly after acquisition, achieving an occupancy level of 100%.

During 2015, RF Corval was approached by a number of offshore investors with interest in this property, which ultimately led to terms being agreed to sell the property to Mapletree in December 2015.
RF Corval acquired the property for $71.80m in 2013 and sold it for $106.00m in 2015, delivering a total return to its institutional investors significantly above the initial return target that had been set for this investment. 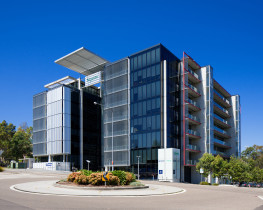